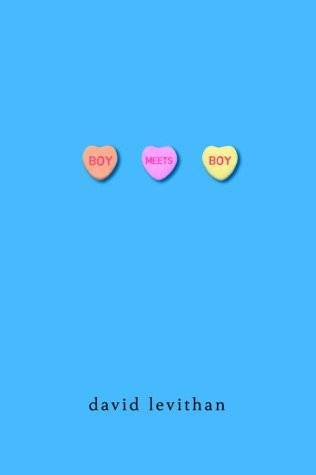 Boy Meets Boy by David Levithan was somewhat of a departure for me from what I have been reading of late. This was not because of the subject matter; most of the books I have recently read have had a gay and/or coming-of-age theme to them since the novel on which I am working deals with both of those issues. Levithan’s novel is a celebration of being gay and it is that celebratory mood that sets this book apart from most of what I have been reading. The story’s main character Paul is a high school sophomore who lives in an incredibly gay-friendly small town. Just how gay-friendly is it? A couple of examples will demonstrate my point. The homecoming queen is six-foot four Infinite Darlene; she used to be a guy named Daryl and also happens to be the star quarterback of the school’s football team. A gay-straight alliance was organized at the school so the straight kids could learn to dance and how to dress better. There are other examples of the unusually relaxed attitudes of students, teachers and parents in this fantasy small town but these are two of the most hilarious ones.

The story is told through the eyes of Paul who has known he was gay ever since kindergarten; yes I did say kindergarten. He, his parents and brother are all very comfortable with his being gay as is practically everyone else in the community. Paul is popular at school; his two closest friends are Joni, whom he has known since second grade and who is brutally blunt about her feelings, and Tony who lives in a nearby town. Tony’s home life is the complete opposite of Paul’s. His parents are feverishly religious and keep him on a short leash so that he won’t be corrupted by Paul or others of his ilk. Tony also is gay but closeted because of his parents’ beliefs and attitudes. The struggle Tony must endure to break loose from his parents’ control is the dark side of what is otherwise a very light, quirky and humorous story.

The heart of the story though is Paul’s meeting a new kid in school named Noah and falling for him big time. The two teenagers begin spending a lot of time together and a romance starts developing. When I say romance I’m talking about nothing more risqué than simple sweet kissing; the book is aimed at a YA audience and the author does a stellar job of maintaining a PG quality to his writing. Paul and Noah’s romance though is seriously jeopardized by the reintroduction of Paul’s ex-boyfriend Kyle into his life. Not wanting to spoil the plot, I will refrain from commenting further about this complication.

One of my favorite quotes from the book is the following: “Tony and I figure the best thing a straight boy with religious, intolerant parents can do for his love life is tell his parents he’s gay. Before Tony’s parents discovered he was gay, they wouldn’t let him shake hands with a girl. Now if he mentions he’s doing something with a girl – any girl – they practically pimp him out the door.” The lighthearted, whimsical nature of those three sentences should give you a good sense what a joyfully playful book this is to read.

This was Levithan’s debut novel and won him the 2004 Lambda Literary Award in the Children’s/Young Adult category. We know that places like Paul’s town sadly do not exist but how much fun was it to think that such a world is possible even for the short time it takes to read this book. I plan to read more by this talented and entertaining author in 2014.