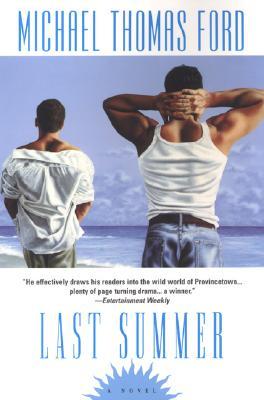 Earlier this year I read Changing Tides by Michael Thomas Ford which I found very enjoyable. I found out that he has written or co-authored a large number of books covering a variety of genres over a twenty year period and added a couple of them to my To Read list. Last Summer was the one that most intrigued me in part I think because it takes place in Provincetown.  I came out as a gay man while living in Boston oh so many years ago; since P-Town was an easy two-hour drive from Boston and also has a sizable gay population I often went there over a three-year period to relax, enjoy the sun and surf, and be a bit mischievous.

The story takes place from Memorial Day to Labor Day. Rather than focusing on just a few main characters, the reader is introduced to an ensemble of individuals who find themselves there for the summer. Some are long-time residents, some are people looking to simply relax and have a good time and some are there trying to escape their past. The story begins with Josh Felling who has left his apartment in Boston after finding out his long-time boyfriend has been sleeping with someone from his gym. He goes to Provincetown with the notion of having a long weekend by himself to sort out his feelings and winds up spending the summer there. Toby Evans is a somewhat naive seventeen year-old who has traveled by bus from Missouri to escape the condemnation of his parents for being gay. Emmeline also came here to escape parental rejection many years earlier. He/she performs in a drag show and is working to save enough money to have a sex change operation. Jackie has lived in town for 20 years, owns a popular restaurant/bar/nightclub and has recently ended a relationship with her long-time partner Karla. She is also about to turn forty and questioning where her life is headed. Reilly Brennan comes from a family that has lived in P-town for generations. He and his fiancée will soon be getting married but he finds his fantasies are disturbingly about members of his same sex. Ty Rusk is one of the hottest new stars in Hollywood and is fantasized as husband material by millions of adoring fans. What they don’t know is that he is a long-term relationship with his producer, Reid Truman. Devin Lowens is a local who has aspirations of making it big-time in New York or Hollywood but has begrudgingly moved back from NYC into her family’s home. She has an enormous student loan to pay off and feels bitterly beaten and defeated by having to live with her parents again. Marly Prentis is the successful director of the Arts House, married and with one child, who is now finding her life dull and hoping to find something or someone to re-energize it.

It is these characters and others who populate this well-written book. The story is told from the third person POV. Each chapter is brief, typically ten pages or less, and each chapter changes its focus from one of these characters to another. Ford executes this process very skillfully; in the hands of someone else the shifting emphasis of character might be confusing but I found it flowed very smoothly. The book in some ways reminded me of two other works, one a movie, the other another novel. The movie I have in mind is the 2004 award-winning Crash, the book or more correctly books of which this reminds me is the Tales of the City series by Armistead Maupin. The analogy is that all of these have an ensemble cast, not merely two or three main characters, and their lives are on a collision course with one another.

While I enjoyed Ford’s 2007 work Changing Tides, I feel this earlier work is superior. Last Summer won the Lambda Literary Award in 2004 for Best Romance Novel. If I had to find one fault with the book I would say that it has a little bit too much of a happily ever after ending. I think that’s a pretty minor criticism though. Ford wrote this book to entertain and he does a top-notch job at that. The story moves quickly and the characters are well-developed and believable. I’m surprised the story has not been adapted for either the big or small screen although maybe even in 2013 it has too much of a gay theme to make that happen. If they ever did do it though Joseph Gordon-Levitt would be perfect-casting for the role of Josh.

Even though I read the book right before Christmas, I would say put this on your summer reading list, preferably reading it on the beach or on a chaise lounge sipping one of those silly summer drinks with an umbrella in it.