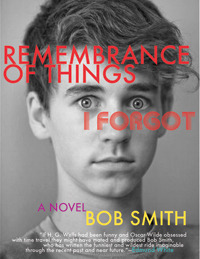 Last summer I read Remembrance of Things I Forgot by Bob Smith and am now finally getting around to reviewing it. The opening line from the book sums up the essence of the story very well. “It’s safe to say your relationship is in trouble if the only way you can imagine solving your problems is by borrowing a time machine.” The year is 2006 and comic book dealer John Sherkston has just broken up with Taylor Esgard, his boyfriend of fifteen years. The two are political opposites: John a liberal Democrat and Taylor a Log Cabin Republican. Taylor is a physicist and on the same day as their breakup he has announced that he has invented a time machine for the U.S. government. As the two are meeting with Vice President Cheney whom John despises and Taylor admires, John enters the time machine and accidentally transports himself back to 1986. John realizes he may actually have the chance to change history while there and quickly launches a whirlwind of activities to do just that. First he connects with his younger somewhat naive self  “Junior”.  Junior begins flirting with the older John who promptly tells him “I’m you, only with less hair and problems you can’t imagine.” He and Junior then meet a younger Taylor and John hopes he can intervene to ensure that the two young men have a happier future together. His most challenging goals though are to save his sister and father from their downward spirals as well as take steps to prevent Bush and Cheney from ascending to power. As the plot progresses John and the reader learn that given the opportunity to change history one has a good chance of just finding a new way to mess things up. The story is a comical, edgy, entertaining and fast-paced tale of time travel that for the most part succeeds.

Smith first attained recognition as a stand-up comedian and was the first openly gay comedian to appear on The Tonight Show. As my brief summary suggests this satirical novel is a showcase for the author’s comedic talent.  He peppers his story with a steady stream of funny lines and incidents. A good example of that involves John’s first meeting with Cheney, the story’s arch-villain, who after being introduced by Taylor, extends his hand to John. “There was an awkward moment as I decided what to do. I shook his hand. This is how people end up accomplices to murder, I thought. They just wanted to be supportive or they’re overly polite and don’t want to cause a scene.”

I found the humor very strong through the first half of the book and quickly became absorbed in the novel. But as the story progressed I found myself less entertained by it. Perhaps this was because it was fresh and new at the start and then seemed repetitive after a while. I think where this story works best is the personal story of John’s efforts to save his sister and father from self-destruction and his hopes to make the John/Taylor relationship survive. As someone who regards the eight year era of inept Bush and evil Cheney as one of the bleakest times in American history, I was initially amused and chuckled at the jokes being made at their expense. Eventually though Dubya and Darth Vader became too cartoon-like and as much as I loathe the two and enjoy seeing them skewered, the over-emphasis of their characters drags down the overall success of the book. The plot itself got weaker and even for a farcical science-fiction tale it got a bit too outlandish by the book’s end. Overall my impression of the book was positive but I did not feel it lived up to its full potential.