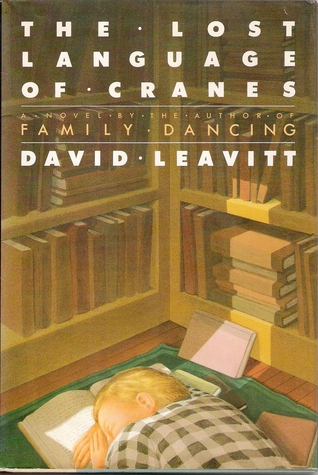 What an incredible book to launch my 2014 reading! First published in 1986, The Lost Language of Cranes by David Leavitt is an intense, powerful, well-written study of an intellectual middle-age couple and their grown son. Set in Manhattan in the 1980’s, each of the three main characters has kept secrets from one another for a long time, and the story traces the need to finally reveal those secrets and the consequences each faces for doing that.

Rose and Owen Benjamin have been married for twenty-seven years and live quiet, mundane lives on Manhattan’s East Side. Rose is a copy editor for a small NYC publishing house. She is a very structured person and her work is the centerpiece of her life since her home life is so passionless. Her secret is that of a five-year affair she had in the distant past with a co-worker. Owen had a promising academic career long ago but gave it up and settled for a drab position as the director of a private Manhattan boy’s school, a position that leaves him unfulfilled. The boredom of his professional and home life is relieved only by his visit every Sunday afternoon to a gay porno theater which he has frequented for many years. The couple’s lives are further complicated by the fact that they soon may be forced to leave their apartment of many years due to a proposed condo-conversion.

Their only child and twenty-five year old son Philip has his own apartment on the West Side and works midtown as an editor of romance novels. He has fallen in love with Elliott Abrams whom he has known for about a month. Philip is painfully insecure and since Elliot is his first love in a long time he is overly eager to cling to him which alienates Elliot. Phillip is also captivated by the fact that Elliot was raised by two gay men in a literary and bohemian world, an environment totally alien from his own experience. While he is out as a gay man to his friends and co-workers, Philip has never revealed his sexuality to either of his parents even though he has known since a young teenager that he was gay. Now he feels a need to tell them since he has finally fallen in love. His decision to come out to his parents has unforeseen consequences, most acutely his father’s need to finally acknowledge that he too is gay.

This is a book to be enjoyed on many levels. Leavitt’s rich and rewarding story draws the reader into the hearts and minds of its characters. It is an excellent portrayal of different relationships: lovers, parent/child, husband/wife, friends, roommates. The story is also an engrossing account of keeping secrets and the terrible toll that can have on a person physically and emotionally. The author raises valid questions. Is it always best to tell the truth or should some things be left unspoken?  Is the burden lifted from the bearer of the secret simply transferred to the person learning the secret? Leavitt does not answer these questions but raises them in the reader’s mind for consideration. He also shows what a horrible price one pays for living in the closet. Reading and understanding Owen’s many years of secrecy, shame and guilt is painful and his desire to touch and be touched by someone for whom he feels passion is very poignant. Additionally throughout the story there is an overriding theme of loneliness and what one can or should do to try to overcome it that goes beyond just the three main characters.

The specter of AIDS looms through the story. Written at the time of the introduction of the cataclysmic AIDS era there is the fear and dread of contracting the disease running through the minds of many of the characters, a sense they are being forced into monogamy to simply survive. “Now monogamy was in fashion, but it had taken on the status of a safety tactic, an unappetizing but necessary catastrophic measure, like one of those World War II recipes for stretching precious rationed meat. ‘Find ten buddies and agree to fuck only with them,’ Phillip had read in a porn magazine early in the crisis. Then ten was reduced to five, five to two…fear became an indirect route to monogamy and, sometimes, to happiness.”

Before reading the novel I was intrigued by its unusual title and assumed it was a reference to the long-legged and long-necked birds. Instead though it is a reference to research being conducted by Elliot’s roommate Jerene, clearly the strongest and most powerfully drawn of the secondary characters. A black lesbian who was coldly rejected by her adoptive parents once they learned of her sexuality, she is busy doing research on lost languages. She stumbles upon the bizarre story of a neglected two-year old boy who related to and imitated the movement and sound of the mechanical cranes he saw from his tenement window rather than that of his biological single mom. The boy becomes the Crane-Child and when he is removed from them what he shared is forever lost.

This is a perfectly slow-paced novel, just the right tempo to paint incredible characters and draw the reader into their lives. Never did I feel it was moving too slowly; it held my interest throughout. As I am writing this it has dawned on me that the story in some ways reminds me of Edward Albee’s play Who’s Afraid of Virginia Woolf? which like this novel dealt with dark secrets and the consequences of revealing those secrets. I was totally captivated by this book and plan to read more by this talented author.

One final comment. The book was adapted by the BBC into a made-for-TV movie in 1991. The one significant change was the setting, London rather than New York. I caught a glimpse of it on YouTube and from what I saw other than the setting it appeared very faithful to the book.