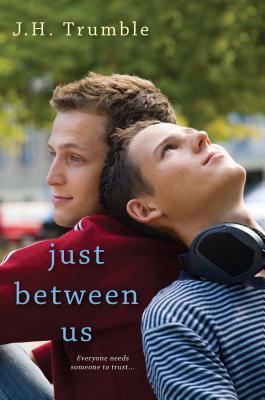 Just Between Us is the third book by J.H. Trumble that I have read in the past seven months and just like her first two she has scored another clear winner with this one. Since  my own book deals with a young gay man in his late teens, I have sought to read books with a similar theme in hopes of learning from others what for me at least works and what does not. It was this mindset that led me to read her first novel Don’t Let Me Go. Having enjoyed that so much I then read Where You Are which I enjoyed even more. Just Between Us is her most recent work. While each of her novels has a common thread of young gay men in love, the author successfully tackles very different topics in each. Don’t Let Me Go focuses on issues of gay-bashing and the challenges of trying to keep alive a relationship when two people are living more than a thousand miles apart. Where You Are dares to take on the explosive issue of student/teacher intimacy. Just Between Us chronicles the hurdles of two people being attracted to each other and then having one of them learn that he is HIV positive.

The main characters of this work are Luke Chesser and Curtis Cameron, ages 17 and 19 respectively. Luke was a major secondary character in Don’t Let Me Go. He is a high school junior and is still recovering from having his heart broken in his first romantic fling. Having an abusive, homophobic father does not help matters any. Fortunately for him his physician mom and younger brother are loving and supportive. He is a member of the school’s marching band which is a big part of his life and that helps to fill in some of life’s blank spaces. Curtis is in college but attended the same high school as Luke. After spending a good portion of his time partying in his college freshmen year he returns home and helps out as a field tech in Luke’s marching band. Unlike Luke, Curtis’ widowed dad is very accepting of his being gay as is his twin sister. The two young men soon become attracted to one another and start spending time together while postponing any sexual intimacy.

The proverbial you-know-what hits the fan when Curtis learns he is HIV positive. By now he cares deeply about Luke and is terrified that he may infect him if they have sex. The remainder of the story focuses on how these conflicted lovers and others around them deal with the news. Having been a sexually active gay man before and during the Age of AIDS and having watched scores of friends succumb to the disease, I fully appreciate what devastating news this normally is for someone. While HIV/AIDS is today not the death sentence that thirty years ago most people viewed it to be, it is a terrifying and life-altering experience for those who contract it and the people who love them. The author does a superior job depicting Curtis’ coping with the news and the stages of grief he experiences: denial, anger, depression and eventual acceptance. The reaction of Luke and others is likewise very believable. The author once again tackles a difficult issue and avoids creating clichéd characters and situations. This is a very moving, at times heart-breaking and at other times triumphal story. Just as she did in Where You Are, the story is told from the perspective of the two main characters and the technique works as effectively in this book as it did in the earlier one.

Rereading my review of her previous works, I see that what impressed me about those stories is much of what I so enjoyed reading this one. Of Don’t Let Me Go I wrote: “a very sweet, tender coming-of-age novel but not one that is overly sweet, throwing in enough drama and darkness to make it all seem very real. All of the characters have their flaws… He is impulsive and foolish at times and certainly does his share of dumb things. There are times when I wanted to kick him in the butt and other times when I wanted to tell him to stop being so insecure.” Of Where You Are I commented: “He is tormented trying to figure out what is the right thing to do, struggling with the collision course of wanting to be there for Robert, the growing sexual attraction he and Robert are feeling for one another, and his terror of where all of this may lead.”  Except for proper names, the comments are just as  true about this work. That in no way suggests the author is somehow using a cookie-cutter approach to her writing but rather that she has the rare gift to make her stories and characters appealing and believable. Not wanting to spoil too much of the plot I will simply say there were several times when I became very choked up reading this book and my eyes started filling with tears. That does not happen often when I am reading and I can only say thank you ever so much Ms. Trumble for your incredible writing talent and for giving me hours of enjoyable reading. You are a true inspiration for me in my efforts. For anyone who has not read any of her books put all three at or near the top of your To Read list. You are in for some phenomenal works. And please, please another book soon I hope!