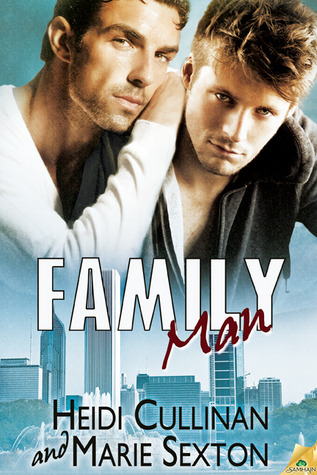 This book turned out to be surprisingly good – not great but compared to some of the M/M stories I have recently read, a definite improvement. As a gay man I like reading stories whose plots include two guys finding each other attractive, having sex and building a future together. I won’t deny that I enjoy being aroused by the descriptions of their love-making but when an author uses the thinnest of plots to essentially write nothing more than pornography, I feel cheated by the author. Regrettably I have encountered that a fair amount in my reading of late. How depressing to then see other readers give those books a 4 or 5 star rating on goodreads!

Much to their credit, Heidi Cullinan and Marie Sexton who co-authored the book avoid this approach or at least do in Family Man, the first book by either author that I have read. The story traces the relationship and romance that blossoms between Vince Fierro and Trey Giles. Vince is approaching forty, has been married three times (each one ending in divorce) and in the first pages of the book is beginning to question his sexuality. On the advice of his sister he heads to one of Chicago’s Boystown bars to check out the scene, hoping to prove to himself that he is not gay. He’s there just a short while feeling he has succeeded in validating that he is straight when in walks the attractive and much younger Trey, whom Vince casually knows from his neighborhood. Trey is openly and comfortably gay but is dealing with a boatload of issues in his life – a mother with severe substance abuse issues, a grandmother whom he loves dearly and whom he feels he needs to care for, two jobs, and school. He feels he does not now have the luxury of time to be dating anyone. In fact he has decided to remain a virgin until he meets the right guy. The two start to talk and Trey convinces Vince to go to another club where they dance cheek-to-cheek to the sexy music of John Coltrane. They quickly become attracted to one another; Trey’s no-sex attitude in fact makes Vince feel comfortable that he does not have to perform. Before very long a romance is blooming.

A lot happens before the last pages not the least of which is Vince coming out to his big Italian family, no small achievement. The book contains its share of humor, pathos and yes some down-and-dirty sex but that last item does not occur until more than halfway through the story. It was a joy to read the poignant connection that develops between the two main characters and to see each of them try to work through the emotional baggage they carry before having to read who stuck what into whom (not suggesting for a moment that was not enjoyable and sexy to read). The authors took the time to build an interesting story and develop appealing, complex and believable characters. What a breath of fresh air compared to some of the smut I have recently encountered!

One thing that I found a little odd about the work was the fact that while you see the story shifting between each character’s perspective, Trey’s vision is written from a first person POV, whereas Vince’s is from a third person POV. The fact that the book was written by two people made me wonder if essentially one author was writing Trey’s part of the story and the other writer was penning Vince’s story. If so it seems a little odd that before the book was published someone did not edit it to make it have a uniform POV. I did not see where this technique if intentional added anything to the story. I guess it would be a good question to ask the two authors.

I do think this is a worthwhile work and would recommend it to anyone who wants an easy, quick and satisfying novel. I posted a similar review on goodreads and commented that I so hate the very limited 5 star rating system that goodreads uses. As has happened so often in the past, for me this book falls between a 3 and a 4 under their system; more like a 7 out of 10. I cannot bring myself to rate this a 4 based on some of the books to which I have given that rating in the past. Thus I will have to knock it down a notch to a 3. 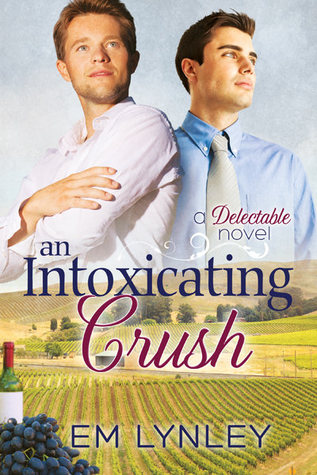 This is the first book by E.M. Lynley that I have read but after finishing it I doubt it will be the last. The story takes place in modern-day Napa, the heart of California wine country, and centers around the relationship of Simon Ford and Austin Kelvin. The two men come from entirely different backgrounds and have very different personalities.

Simon is a native of Napa who has a deep resentment of the nouveau riche who have moved to Napa and spoiled his birthplace by opening boutique wineries that are squeezing many of the locals out of business. He never knew his dad; his working-class mom raised him entirely on her own. Simon is bright and ambitious and has recently started working at a firm headed by the ruthless Mr. Tuchman. Due to his strong work ethic he is quickly making a name for himself there.

Austin comes from the opposite side of the railroad tracks. His father made a fortune on Wall Street and then moved the family to Napa where he opened a winery, just the sort of family Simon so deeply resents. His dad and older brother have lost interest in Kelvin Cellars but Austin has turned it into an award-winning venture. On the surface Austin lives the privileged lifestyle Simon resents but secretly craves. Austin’s lack of business savvy though threatens the future of the business and he is struggling to keep it afloat while doing his best to keep his struggle a secret to everyone including his family.

Simon’s boss sends him on a covert mission to check out Kelvin Cellars to explore the possibly of a buyout of the business. Simon views the assignment as a golden opportunity to advance himself at the firm and improve his lot in life. While there Simon and Austin are almost instantly attracted to one another and soon become involved in a very passionate relationship. Their relationship is threatened when Austin learns of the covert mission, making him seriously question Simon’s intentions.

The author clearly has a great wealth of knowledge of the wine industry and weaves that knowledge through a fascinating and very believable story. This was a very enjoyable and quick read. It also had some of the steamiest sex scenes in it of any book I have read in a long time. As a gay man, I am in awe that the author who is a woman was so capable of depicting in such graphic, erotic detail the intimacies these two men share. At a writer’s conference I attended earlier this year, one of the speakers noted that writing sex scenes can be tricky, something I have discovered in the course of writing my own first novel. The issue becomes how to raise the temperature and increase the heart rate of the reader without sounding ridiculous or silly. There are books, blogs and classes dedicated to this very issue and so I do not intend to write at length on the matter. Certainly the author did an incredible job of raising my temperature and increasing my heart rate while reading the descriptions of Simon and Austin’s love-making. Reading this review you might get the impression that this is a work of pornography and if so that is entirely inaccurate. This is a very well written story that just happens to have some steamy sex scenes in it.